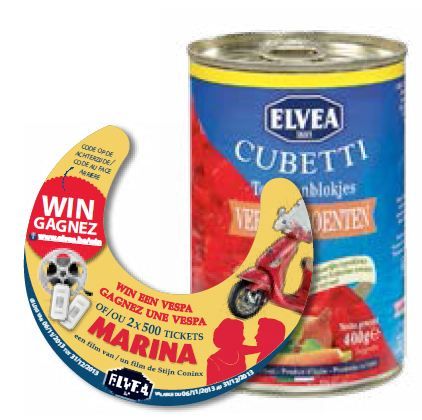 Participate and win a Vespa or tickets to the movie Marina!

Following the new movie “Marina” by Stijn Coninx, Elvea is giving away cool prizes, among which a Vespa LX Touring 50cc to the value of  € 3049!
Elvea also gives away 500 tickets for two to the movie “Marina”. The movie is inspired by the life story of the Belgian-Italian musician Rocco Granata whose roots, like those of Elvea,  are based in the lovely Italy. In the late fifties, the Italian had a massive break-through with his world hit ‘Marina’ that sold over 5 million copies.

The Elvea products are the result of an indestructible success. For over 125 years, the blue canned  tomatoes have been an unquestionable product of success for every culinary enthusiast.

Buy your Elvea Cubetti tomato cubes now and participate using the action code on the packaging.
The winner of the Vespa will be announced in the course of January 2014 on www.elvea.be/win.